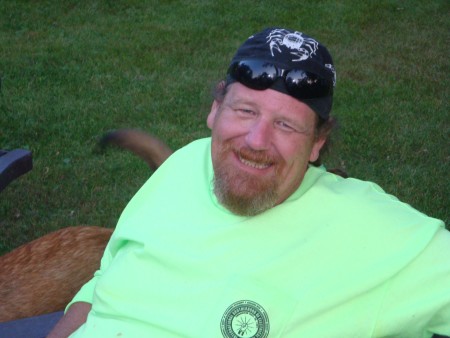 It is with the deepest regret that I announce the passing of our club Secretary and Treasurer, Richard “Stimpy” Kohli.  Dick served four years as the club Secretary & Treasurer and a wealth of knowledge was lost with his passing.  Our condolences and sympathies go out to his wife Penny and their children with the assurance that he will never be forgotten.

Obituary from the Lima News:

He was born on April 6, 1963, in Lima, to Robert Kohli, who survives, and Lois Cox Burgan, who preceded him in death.

On December 19, 1986 he married Penny Lynn Osenbaugh, who survives.

Stimpy was a proud member of the IBEW Local 32, where he was the President, and electrician by trade, with a national reputation for his expertise in his profession.  He was a member and the Recording Secretary & Treasurer of the Black Swamp Rifle & Pistol Club, and was a former Board member of ARC of Allen County.  He was previously a coach for the Eagles Midget Football Team and had a love for gardening.  Stimpy was known to be an expert marksman.

He was preceded in death by a son, Brandon Michael Smith, and his step-father William Burgan.

Memorial contributions may be made in Stimpy’s memory to:  The American Cancer Society.

Online condolences may be sent on www.chamberlainhuckeriede.com